These are our Forever Fosters…dogs requiring Long Term Care.

Some of our BRB pups have limited options for adoption – most are seniors with on going medical needs. These pups have loving forever foster families while BRB provides for their ongoing care, which can be costly.  When you sponsor one of these pups, your donation goes towards that specific pup and you will receive updates periodically. You can make a one time donation or a recurring monthly donation for their care.

Select an amount to make a recurring monthly donation (requires a Paypal account). 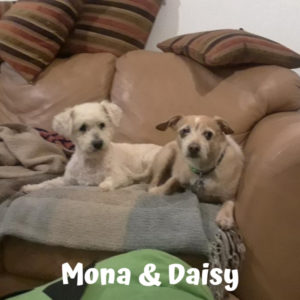 Mona and Daisy joined BRB in 2017 they were turned into the shelter as their owner had died. They were 14 and 15 years old, in terrible condition. These two very sweet, gentle girls joined Andrea’s family with her two senior boys. She wanted to provide them a home together to live out their days. Daisy has recently been diagnosed with cancer. Both girls are on medications for xxxx, 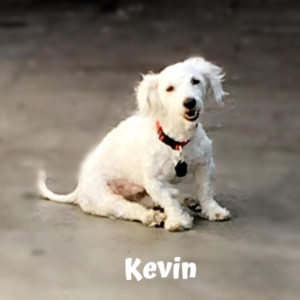 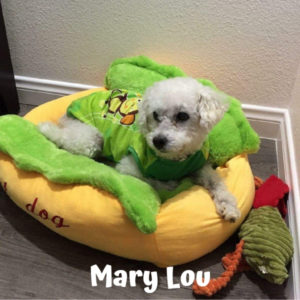 Shelters can be a scary place for animals, as the sounds and smells that are common to them are amplified by the volume of dogs, cats and other species that occupy kennels there on any given day.  It’s likely they are even more frightening and confusing for senior animals that have spent their years in loving homes, and cannot understand where they are now or why.

Marylou came to the Los Angeles County shelter at Carson in October 2017 as a stray over-the-counter, meaning someone brought her in.  While she may have been found running the streets, it’s not uncommon for owners to bring in their aging animals claiming them to be a stray when they can no longer care for them … or no longer care to. Marylou was spayed, so she had been someone’s pet during her 9 years. She had a heart murmur, dental tartar, cataracts, neck wounds/growths and possible metabolic issues, so she was only available on a health waiver. Bichon Rescue Brigade answered a plea from OPCA and, on Halloween 2017, a shy 11-lb. Marylou left the shelter and joined our brigade. Little did we know that her most frightening days were yet to come as she fought to survive.

After receiving the immediate medical treatment needed, Marylou went to her foster home and instant canine family in San Diego. One of the pups even has his own social media page with many followers! Marylou could not have picked a better home, but needed time to settle in and feel safe. Her patient foster Mom & Dad documented her progress:

Dec. 15, 2017:  Marylou is still adjusting but she is doing so much better. She still tends to be shy of people but by trying to socialize her in a safe public area, she can observe people and be near them, but they can’t touch her … so she’s working on overcoming fear of people now. Sleep patterns is still similar, she loves to nap all day and will sleep throughout the night. The one nice thing is she seems so peaceful while sleeping, I’m sure she feels safe no matter which location she chooses to sleep in. Her appetite is still very good and she is learning to stop eating when she’s had her ration, not worrying about when her next meal comes and knows she will always be fed. Still very quiet and slowly showing more affection, she does mostly keep to herself and really is a low maintenance dog.

Dec. 26, 2017: Pretty much the same behavior wise … still scared of people and keeps to herself. It’s funny, when the other dogs start barking because something has annoyed them, she peeks from around the couch to see, but never starts barking as the rest of them do. She is still easily startled and seems scared of everything. It’s going to be a long time before this poor baby can overcome some of those fears. She has been responding to the word “treat” and has a smile on her face when we’re handing them out. She gets very excited, still no barking, but sort of dances when getting a treat. She is such a quiet and sweet girl and she just needs peace & quiet for her to feel comfortable.

Jan. 28, 2018: So Marylou got her first haircut today! She was very scared of the dryer, but our groomer tried to keep her calm as possible. Marylou’s potty training has come along very nicely and she has learned that if she goes on the pee pad, she gets a treat as a reward and she will head to the kitchen to await her treat. It’s really cute! She still has the fluid buildup in her lungs and after she wakes from her naps, she has a slight coughing fit to clear her lungs. The positive is that we are not seeing this increase.  Her walking is unsteady at times, and her legs buckle under her often when she walks or gets excited and tries to jump around. Since our vet already warned us about her knees, all we can do for her right now if make sure her weight stays at a good level to ease the weight off her knees. We are just trying to make sure she is as comfortable as possible so she feels safe.

Feb. 22, 2018: Lately, Marylou doesn’t want to eat her breakfast and will sometimes eat only once a day. There are times too when she doesn’t even want to eat a treat. It does concern us that she is reducing the amount of food she eats, so we are monitoring her closely. Marylou still spends most of her day sleeping and walking slowly around. But here is something really funny about her. Whenever we go out for errands and come back home, first thing we do is let all the dogs outside since they are so excited to see us. Marylou will actually run and jump around excitedly to welcome us home. She acts as a young pup and this spurt of energy/excitement usually lasts about 3-5 minutes before she needs to go lay down again. But it is so sweet to see that spark of life in her knowing that she is so happy to see us now.

But, on March 11, Marylou’s situation became very scary as she landed in the Emergency Room. Her foster Dad reported:

Mar. 11, 2018: The ER suspects acute hemorrhagic diarrhea syndrome (HGE) … it can be fatal. They said most dogs do well with hospitalization for 24-48 hours for aggressive IVF, as well as anti-nausea medication and BP monitoring. Marylou will eat on her own, but right now she is not interested in food and she definitely needs to eat. She is still receiving fluids via IV as they monitor her heart murmur so as to avoid any complications. The ER recommends staying the night and maybe another 12 hours after depending on how she does. Getting her to eat, reducing inflammation, and reducing that diarrhea is critical right now.

Mar. 12, 2018: Update on Marylou, hopefully she can come home tomorrow, but she doesn’t sound like she is doing well at all. As of last night around Midnight, she was having bloody diarrhea again and not digesting the food they were feeding through the tube. They did perform an ultrasound at 3:00 AM on her to discover that her pancreas and colon were inflamed and that the track lining is so raw and thin now, that could be from where the blood is coming from. They had to collect more payment from me this morning so that they could continue with another 24 hour plan for her. They will be doing an ultrasound on her soon again as well as a new blood work panel since her red cell count is high. They are concerned about her having pancreatitis.

Mar. 13, 2018: We were able to pick up Marylou and bring her home. First thing she did was pee in the yard and came inside looking for her reward! We will make a home cooked meal for her shortly to see if the smells will pique an interest.  She hasn’t eaten since 11PM last night, so hopefully she will be interested enough to try and eat a little bit. The total bill for her care comes to $8,842. There also are discharge instructions that need to be looked at and decisions to be made for her follow-ups and some other possible issues that see arising for her heart, eyes, adrenal glands, and kidneys.

Rescues need to weigh how much to spend on a single dog, knowing that such funds spent on a single dog could help many others in need. BRB was able to raise funds specifically for Marylou’s care, and two special angels covered most of the cost. Marylou’s recovery has been long and slow, the biggest issue being her lack of interest in food despite her foster parents cooking customized meals for her. She is improving slowly and her devoted parents remain steadfast … so much that they asked to continue caring for her as forever fosters. BRB could not be happier for them and for Marylou! Nearly one year since her journey began with BRB, Marylou is preparing her Halloween costume … and it’s not a scary one. Marylou’s had enough scary for one year.